The Kuyavian-Pomeranian region is located in the central part of Poland, where important transport routes, including linesbelonging to the TEN-T transportation network, intersect. The region has a highly developed road infrastructure (the A1 motorway, the S5 and S10 roads as well as rail and river transportation ones, which guarantees easy access to the most important national and European economics centres (e.g. Frankfurt, London, the Tri-City, Szczecin, Warsaw and Katowice). For years, the region has been characterised by high economic potential in areas, such as chemical industry, transportation, electronics, agriculture, tourism (including health tourism) and, recently , also new technologies.

Specialised business environment institutions supporting the dynamic development of entrepreneurship, the commercialisation of scientific research and innovation of enterprises as well as the initiatives of local authorities, serve the development of the economic potential of the region. Therefore, the Kuyavian-Pomeranian region i san excellent place to do business and locate new investments. The fact is evidenced by the presence of more than 198,000 business entities in the area and the numer of investments – both Polish and foreign, growing year on year.

The Kuyavian-Pomeranian Province attracts everyone with its wealth of cultural and historical heritage, making the area an attractive tourist destination. Numerous historical sites are located here: gems of Gothic architecture, primarily in Torun and the Chelmno Land, unique structures made of wood (Biskupin) and numerous cultural institutions (e.g. the Opera in Bydgoszcz). Lovers of nature will appreciate the natural and landscape features of the region: meandering rivers, wilderness, large forested areas, sandy tracks and gentle valleys. In total, eight landscape parks are located in the area – eights gates of nature behind which adventure awaits everyone. It is also the a place for those seeking health and well-being, physical purification and biological balance.

The awareness of the heritage and traditions of the region results in the fact that local authorities seek to strengthen the cultural, economic and social processes in order to modernise what is already good and valuable in the Kuyavian-Pomeranian region. Targeted efforts are also taken, which are specified in the Strategy for Development of the Region and are designed to bring results in the form of a high quality of life for residents and an increase in the competitiveness and innovativeness of the region.

The Kuyavian-Pomeranian region is salso the homeland of outstanding athletes who promote the region by their achievements. Numerous sporting events attract crowds of fans of many different sports. 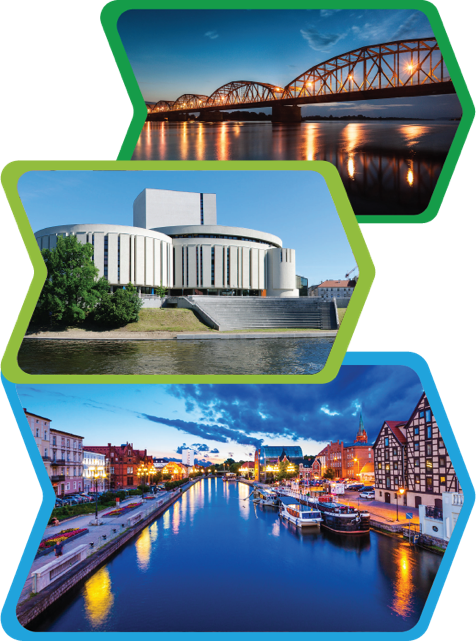